How I stopped worrying and learned to love M13.5x1LH

Dear silencer lovers, I am going to clue you in to a little secret; you’re probably not going to like it but hear me out.

When it comes to 9MM thread pitches for handguns the European standard of M13.5×1 (LEFT HAND) LH is superior to the imperial thread pitch of ½-28 TPI. Now is it ten times better? No. Five times better? Probably. Twice as good? Absolutely. Let’s take a walk.

½-28 is the “standard” thread pitch for 9MM, .22LR, and 5.56x45MM firearms in the United States. The threads are ½ in diameter (at the major) and feature 28 threads per inch (TPI). While numerous thread drawings are available, I typically refer to the ones drawn by Mike Smith – formally of Advanced Armament Corporation. 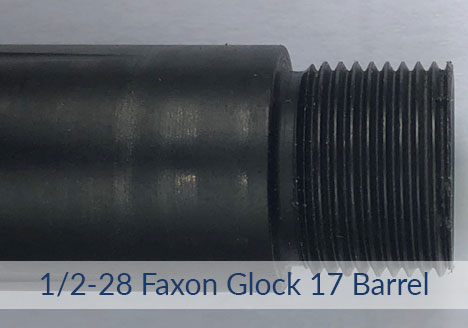 While the standard thread length for .22 caliber rimfires and 9MM is .400 (4/10 of an inch) the thread length called out for rifles is typically .625 (5/8 of an inch). You would be surprised how many manufacturers neglect these standards at the factory. Ruger was notorious for threading their 10/22’s to the rifle length, causing major concerns for users bottoming out the blast baffle of their silencer on the end of the muzzle of their firearm, making direct contact with the baffle. Smith & Wesson continue to do this as well on their M&P 15-22’s. A ¼” spacer is typically required when there is too much thread, which in the silencer world is just as much of a problem as not enough thread.

Lastly, and probably most obvious, the ½-28 thread is a right-hand thread. Which is generally the way most people expect threads to be: right to tighten, left to loosen. Anything other than “the way it is supposed to be” can be off-putting, regardless of if it’s the best way to do something or not.

Now let us take an educated look at the much derided and misunderstood M13.5-1LH. It is the standard thread pitch for 9MM firearms in Europe. It is also the factory choice for Glock, Heckler & Koch, and SIG. It features a coarser thread with 25.4 threads per inch compared to the 28 threads per inch of the imperial standard. It also is not threaded the full length of the muzzle and provides an unthreaded crown. This unthreaded portion is a major aid in threading as it all but eliminates the potential for cross threading, which is more likely with the finer and unprotected ½-28. See the following image. Not only is it mechanically better, but it has a much more sophisticated appearance. Lastly this unthreaded section provides better protection over ½-28. If the host firearm is inadvertently dropped, the end of the barrel does not have threads that could become damaged. 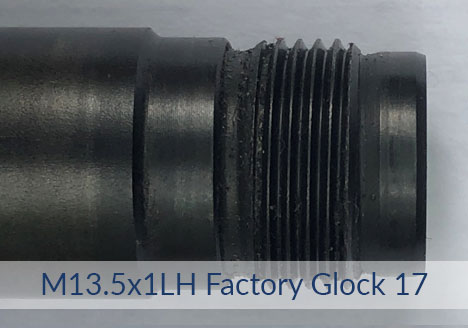 The largest hinderance to the M13.5x1LH thread is the fact of it being lefthanded. Left to tighten, right to loosen. Because our experience has taught us the opposite to be the case in most circumstances some shooters simply can’t flip the switch in their brain to turn the other way.

Let’s take a look at specific silencer usage. Imagine threading a silencer onto a properly threaded barrel using either ½-28 or M13.5x1LH. Using an AAC Ti-Rant 9 piston, installed into a Ti-Rant 9-S, it takes 8 revolutions of the silencer to properly mount it on a ½-28 TPI Faxon Glock barrel. Using the same combination on a factory Glock M13.5x1LH barrel the number of revolutions goes all the way down to 4.5. Less time threading is more time shooting. In the event of a piston loosening up during a string of fire the distal end of the threads- the portion at the “bottom” of the threads (approximately ¾” rear of the crown – see figure below) features a tight diameter fit up. This prevents the silencer from getting too wobbly which could lead to a baffle or endcap strike. 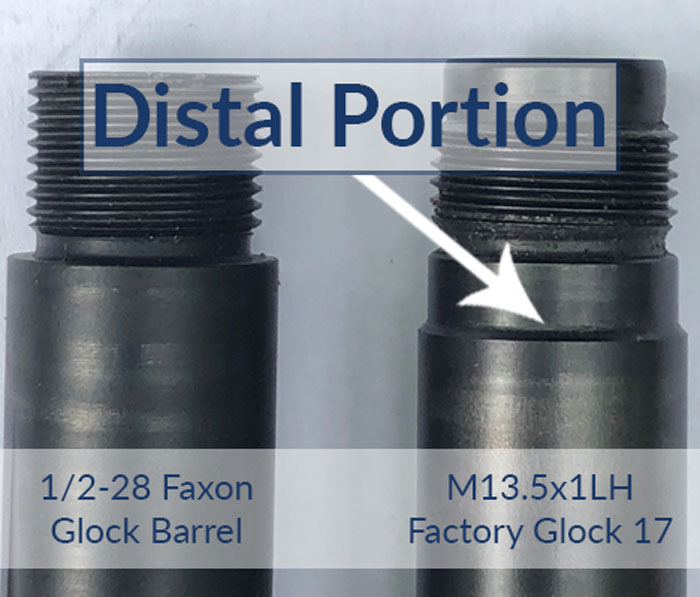 In addition, several manufacturers utilize a piston O-Ring in their M13.5 x 1LH pistons. The Viton rubber O-ring helps keep the piston snug against the crown of the barrel.

Manufacturers that use a rubber O-ring in their M13.5 x 1LH pistons:

Legitimately, the only draw backs to M13.5-1LH are the uninformed who continually try to turn to the left to loosen and the bullheaded insistence by most manufacturers to stand by the inferior ½-28 thread because it is much easier for them to machine.

Hopefully the presented information is enough to change a few minds. The silencer world is small and by educating as many as possible we can make it a quieter place.

This site uses Akismet to reduce spam. Learn how your comment data is processed.

It’s not commonly accepted. However it does exist in some limited applications. I think Sweden uses it.

But the only reason it is left hand is because HK needed a different piston system in the OHG keep the KAC can built for the right hand MK23 off the more fragile HK Tactical .45 without the custom tailored piston system, so they made the threads backward on the more affordable, and thus market popular, HK Tactical. If the engineers had thought about it, it would have made much more sense to make M13.5X1 a right hand thread, because the wrong threaded barrel on the 9mm solved no actual problem, but HK was probably engaging in an attempt to make the HK Tactical Left hand thread not seem stupid, so they stayed the course with the backward threads. And awkward firearm / silencer / end user interactions ensued. People have a lifetime of training tightening clockwise on nearly everything, all over the world.